I’ve created a page dedicated to my (sometimes successful) efforts in using an semi-automated BirdCam.

This page will be updated whenever I have new material or methods to share.

>> Photos, video and discussion are here. 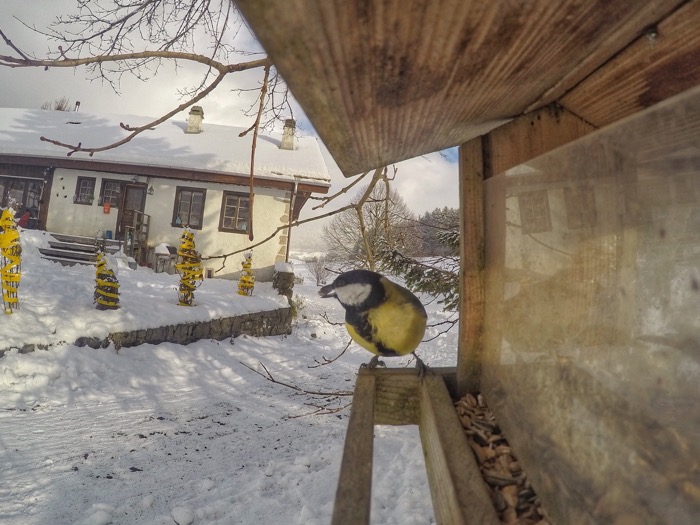 Last evening was a crystal-clear, windless night so I grabbed a couple of lenses, my D4 and a remote timer and stepped outside to grab a few shots of the night sky from our driveway. I haven’t done much night photography in the last year or so and it took a little experimenting for the first few frames to eliminate the star trails and get the focus point right on the stars. Hint: use a max-zoomed live view, manual focus, and then tape the focus ring to the lens barrel once you’re satisfied that the stars are sharp enough. Rule of thumb for exposure time – in general I use the “500 rule”  – 500 / focus length of the lens to get the maximum exposure time (in my case 24mm and 14mm, so 20 sec and 30 sec respectively). I was pushing for 30-second exposures at 24mm, but at that exposure the images/stars were showing star trail motion blur due to the earth’s rotation. Photos taken in Le Côty, Neuchâtel. Click on image for larger view.

First thoughts – Part I of II   ( Update : Part II now available here ) The new Nikon 300 AF-S was finally updated earlier this year to the VR (vibration reduction) version. This update was more or less expected, even though the older AF-S non-VR version was very, very good optically. The older version was (and still remains) a fairly low-cost way to “get to” the 400 mm focal length – considered a bare minimum for many wildlife photographers.  Of course, this focal length is only achieved with this lens by adding a 1.4 teleconverter, thereby reducing the aperture to f/5.6 (yes, it actually gets you to 420mm). I used the older non-VR version for several years and managed to churn out quite a few good bird images with it.

What was not expected with this new release was the size reduction of the new lens. Indeed, going from 1440 grams down to 755 grams and losing about 7 cm in length represents quite an innovative leap, especially when considering the addition of VR to the lens. The secret to this size reduction is the use of Fresnel elements, instead of some heavier glass elements. If the quality of this lens were to match the older version, in a package weighing half as much, with vibration reduction, then this lens was too good to be true and would be destined to be a hot seller for Nikon. Unfortunately, 2 problems plagued the release of the lens;

I’ve personally never been affected by these issues – because I’ve learned not to be an early adopter. Sure, sometimes I would like to be able to order a hot-off-the-shelf version of a new Nikon product, but I’ve learned that I’m much better off waiting 5-6 months (at least) before the product is used by actual consumers & pros and reviewed by trusted reviewers. Anyhow, after seeing the specs for this lens I know it would eventually find a spot in my bag – as long as initial real-world reports were positive. With the exception of the VR issue, which should no longer affect models coming off the assembly line… 9 months after its release, I finally took the plunge and got myself a copy. Serial number 212xxx. Out of the box and 5 minutes later my first shots were tests at shutter speeds of between 1/25 and 1/200 with VR ON… and I’m happy to report that my copy is unaffected by the VR bug. Whew. While I’ve only had good experiences with Nikon Switzerland for service and repairs (as an NPS member), nobody likes sending in a new product for a mandatory service in the first week of ownership. This post is not a complete review, but let me just say that this lens is simply a joy to use and is quickly living up to its expectations. While I don’t mind carrying heavier gear for dedicated wildlife outings or sporting events, having a quality optic like this as a walk-around package for city walks and day hikes is a real game-changer. The autofocus performance is what you expect from modern AF-S Nikkors – very good (though not the same performance as its big-brother, the f/2.8 which I use frequently). I shot a kid’s rugby tournament with it last week and it performed very admirably (for comparison, for kids’ rugby – on smaller fields – I’ll usually use a 70-200 f/2.8 + TCs, and/or a 300 f/2.8 + TCs). I’m using it on a D4 and a D810. Subjectively speaking, image quality and sharpness is excellent at closer distances of roughly 10-30 meters and still very good at mid to longer ranges. You can shoot wide open at f/4 and get very good results. I have read reports that it performs best at f/5.6 – f/7.1 and I’m not going to contest that at all. I’ll be shooting at f/4 without hesitation and only higher when I need more depth of field. I’ve also done some casual testing with all three Nikon AF-S tele-convertors and I’ll have some sample images to post in part II of this mini-review in a few days. In the meantime, here’s a sample image from this week – a sparrow waiting for some lunch… feather detail! Standard sharpening, saturation and contrast applied. Click on the image to download a full-resolution version (taken with D810 in 1.2x crop mode).   (Update: part II now available here) For complete, thorough reviews of this lens I recommend you go here and here.

MONTREAL 🍁
.
On the final approach to a snowy

Black-capped chickadee.
.
While quickly looking up

Snowy Owl
.
My first observation of a snowy in the

Sharing my daughter’s most recent painting. A bi