Recently I’ve casually discussed the idea of photo/data backup with friends and colleagues and quite frankly I am astounded at how much faith they place in a single hard drive computer system. Not just for photos, but everything. As in… no backup whatsoever. Ouch. Hey it’s only your memories, right? This post addresses some weaknesses in the management of digital assets (photo, video) and offers some suggestions so that you, as a casual or enthusiast photographer, can add redundancy in an effort to avoid loss of data.

Let’s get one thing out of the way up front :

Sooner or later all hard drives will die.

And a corollary to that statement :

Sooner or later all hard drives will die, and all data thereon will die with them.

Yep, that should scare the crap out of you if your photos/data mean anything at all to you, and if you indeed have placed all of your photos in one hard drive. I won’t go into the elegant details of exactly how mechanically spinning drives function, but well… let’s just say that it’s a matter of nanometers that distances the write-head from the rapidly spinning disk that contains all your precious memories and/or clients’ images. That disk is usually spinning at somewhere between 5400 and 10’000 RPM. You can google the terms “hard drive flying height” if you’re interested. BTW… a nanometer is roughly the size of a virus, so even a human hair (100 microns) or a fingerprint can easily cause nasty things to happen at that scale and spin speeds. And, as such is the case with all high-tech manufacturing, all devices are built to spec within defined tolerances, and hard drives are not built to last as long as, say your car. As a matter of fact, as I write this, I am looking at a box with no less than 5 dead drives from the past 10 years. Don’t believe me? Here they are:

Firstly, I am nowhere near what you would call a “prolific” shooter. As a matter of fact, I’m quite selective about when I pull the trigger, and rarely will you catch me mashing down on my shutter button, churning out frame-after-frame (I’m generally a “short burst shooter”, unless the situation calls for more frames). I can thank my photo apprenticeship on film cameras for that ($). However, I do shoot RAW format and have done so since 2007. Why do shoot RAW format? The short answer is that I like to eek out the most quality of my images. Although jpeg compression can provide very good quality images, it is still a lossy format and you are essentially throwing away data (quality) in exchange for smaller files.  The raw format is basically the entire data set that the camera sensor captures when taking a photo, including a higher color gamut (more colors). Also, recovery of shadow details is much easier in RAW.  However, there is no free lunch since RAW files are quite big (file size).  In the case of a 36 MP D810 (Nikon), for example, images will weigh in at roughly 50-60 MB per photo (depends on your RAW settings).  This adds up quickly if you shoot a few times per week, even casually. And even as a casual shooter, my data storage needs have grown by a factor of 10 in the past 7 years.  You’d better have some redundant storage and backup strategies in place, also with room to grow.

I started shooting digital in 2001 with a Coolpix 950, only in jpeg, of course. To put numbers into perspective, between 2001 to mid-2007 I shot a total of 46 GB of jpeg data with that 2 MP camera (I also shot film with other camera bodies). In June 2007, I purchased my first DSLR and switched to the RAW format. The following graph says the rest (NEF = Nikon RAW format, aka Nikon Electronic Format. Canon’s format is called CR2) 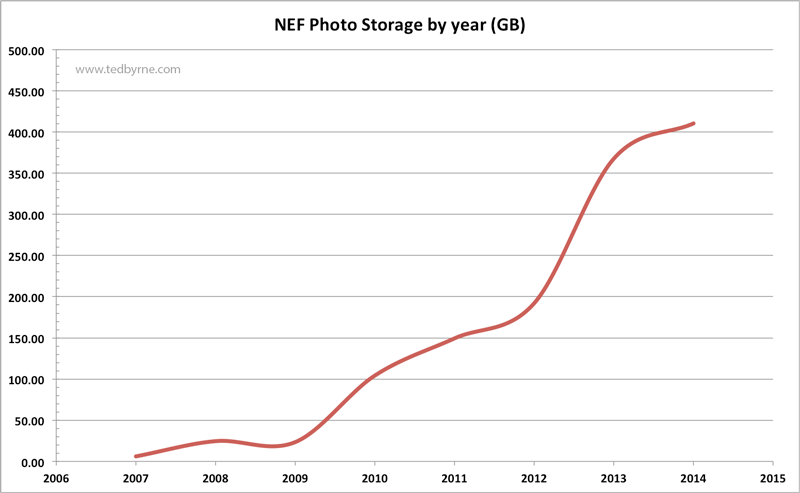 So in 2014 I shot just over 400 GB of RAW data, roughly 9 times what I shot digitally in my first 5 years going digital. As I write this in early November, I ‘m currently at about 500 GB in new NEF so far for this year.

This is only my RAW library. If I add all exported jpegs, iPhone/iPad backup, web galleries, 16-bit TIFFs, and large PSD edits and stitched panoramic files from the last few years, the actual storage capacity almost doubles. I estimate that I’m currently sitting with about 2 TB of combined photo data, as well as about 2 TB of other data (mostly video). That’s a heck of a lot of 1’s and 0’s for a casual shooter like myself.

What about managing and storing that data? Well, shuffling around gigabytes of data needs a fast network – so no… not wireless – we’re just not there yet. You’re going to need fast hard drives, and a fast, wired network – at least USB 3 or Thunderbolt if you’re just doing computer-to-hard drive transfers; Gigabit Ethernet if you’re on a wired LAN.

This is a schematic of my current working environment in my home office (which also ties into a Plex media centre, iTunes server and a family iMac computer). Since I tend to work on both an iMac and a Mac Mini I’ve included both if them in the overall sketch.

Seems like a lot of arrows there, but it’s pretty simple once you break it down – you’ll see that I maintain one main repository for all my media – the Synology 712+  with a DX 213 expansion bay NAS (basically another name for a server).  I’ve been using a various NAS brands for several years, and I’ve settled on the Synology brand because they are simply workhorses, and you don’t need to be an IT expert to set-up and maintain it (some experience helps though).  At the time of purchase, the 712+ model was the best quality and speed for my price point. The DX expansion pack was added later when I needed room to grow, by adding 2 more drives and expanding the RAID. Maybe I’ll write up the NAS configuration in other post, but basically, a “RAID 5” configuration allows for 1 disk failure without losing any data. This is not the same as a true back-up strategy, however, but this redundancy simply permits you to replace a dead or dying drive asap, while your data remains intact on the NAS. The NAS will beep and send you an email when drives start failing regular self-checks.

You’ll see in my drawing above that the NAS is actually mirrored daily to a local drive (WD Book) with an automated script (using ChronoSync).  AND, then that mirrored WD Book data is itself mirrored to another drive once a week, which is moved off-site to my office… about 25 km away from my home.

Moral: Create meaningful, physical distance between redundant sets of important data, as soon as possible and on a regular basis.

But I don’t want to deal with a NAS…

OK, not everyone wants or needs a RAID server. But even if you’re using only a single computer, I would strongly advise these critical, minimal backup points for all photo enthusiasts. Consider these points the CliffsNotes version of what you should be considering as a back-up strategy:

Hope this helps.  Thanks for reading.
-Ted


Yet another star trail shot around Polaris. Not mu

A star trail stack of about 100 images from August

Set up a remote last night to get these young reds

Spotted this fellow while walking the dogs a few d

A meteor, milky way central core and Jupiter.
.
I

Incoming Puffin!
.
More adept in the water than in

A thin line of mountaineers head out onto the vast

Also Find Me On